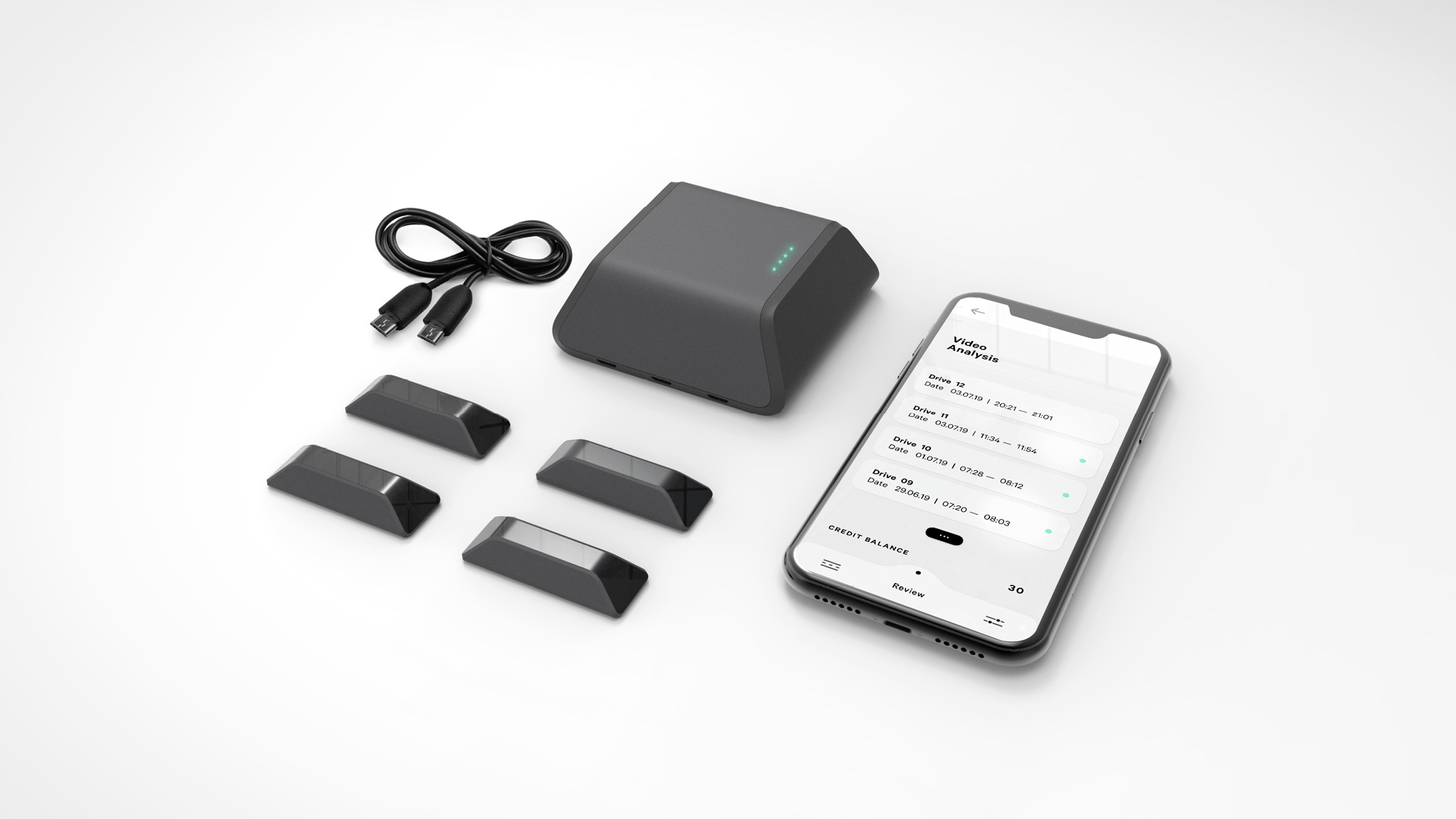 The ARCOS kit consists of three parts: different sensors can be attached to the outer sides of the car, while being connected to a base module and the ARCOS app.

ARCOS is an adaptive driving assistant that transforms older car models into smart cars. By using tiny camera sensors and an AI-based smartphone app, the peripheral traffic can be tracked. In addition, the app’s machine learning software is continuously improved through the participatory involvement of the users. ARCOS mission is to make road traffic safer and thus decimate the number of road fatalities.

Most of these accidents are due to human error: disregard for the right of way, turning or backing up without looking and excessive speed are the most common causes. Although passenger safety has been steadily increasing since the 1970s, other road users, such as pedestrians and cyclists, are still considered particularly vulnerable groups.

How might we provide cost–effective digital upgrades for older cars and thus help reduce road accidents?

In the course of our research, we eventually came up with the idea that small camera modules with magnets could be attached to the body of the vehicle and connected to the driver’s smartphone via Wifi. An app is installed on the smartphone, which uses a machine learning algorithm to cost-effectively combine functions such as lane departure warning, distance warning, parking assistance and traffic participant recognition.

Our research was conducted on accidents, their causes and on different assistance systems. Various self-experiments and test drives were carried out in which the position of the cameras, the app and the object recognition software were tested. A user testing at Fraunhofer IAO helped us gain valuable insights and to improve the app incrementally.

ARCOS enables its users to achieve a high level of driving safety and a coherent user experience throughout hardware and software. The app mostly runs passively in the background and only gives active warnings in dangerous situations. The topic of AI is integrated in a transparent way to create trust and acceptance for driver assistance systems. The user is actively integrated in the further development of the Machine Learning algorithm. After a drive the users are asked to classify objects and analyze traffic situations to give instant feedback on how the system performed during the ride.

Furthermore, the environmental impact is reduced because ARCOS evokes a positive side effect: Users do not have to buy a new car, but enjoy the comfort of a modern driving assistance system – almost the same way an owner of a new car does. In addition, the app makes users more aware of responsible and respectful driving behavior.

Primarily, owners of a car without assistance systems are being addressed. Within this group, ARCOS focuses mainly on novice drivers. These are mostly young adults between 18 and 25 years. A further important target group are seniors who cannot / do not want to afford a new car and who are becoming increasingly limited in their visual perception.

The combination of small cameras, AI and a smartphone offer a cost-efficient solution to equip cars with extensive assistance systems and to predict traffic situations – with only minimal installation effort. In this way, the actual vehicle is decoupled from the electronics, which are quickly becoming obsolete.

The ARCOS kit consists of three parts: different sensors can be attached to the outer sides of the car, while being connected to a base module and the ARCOS app. 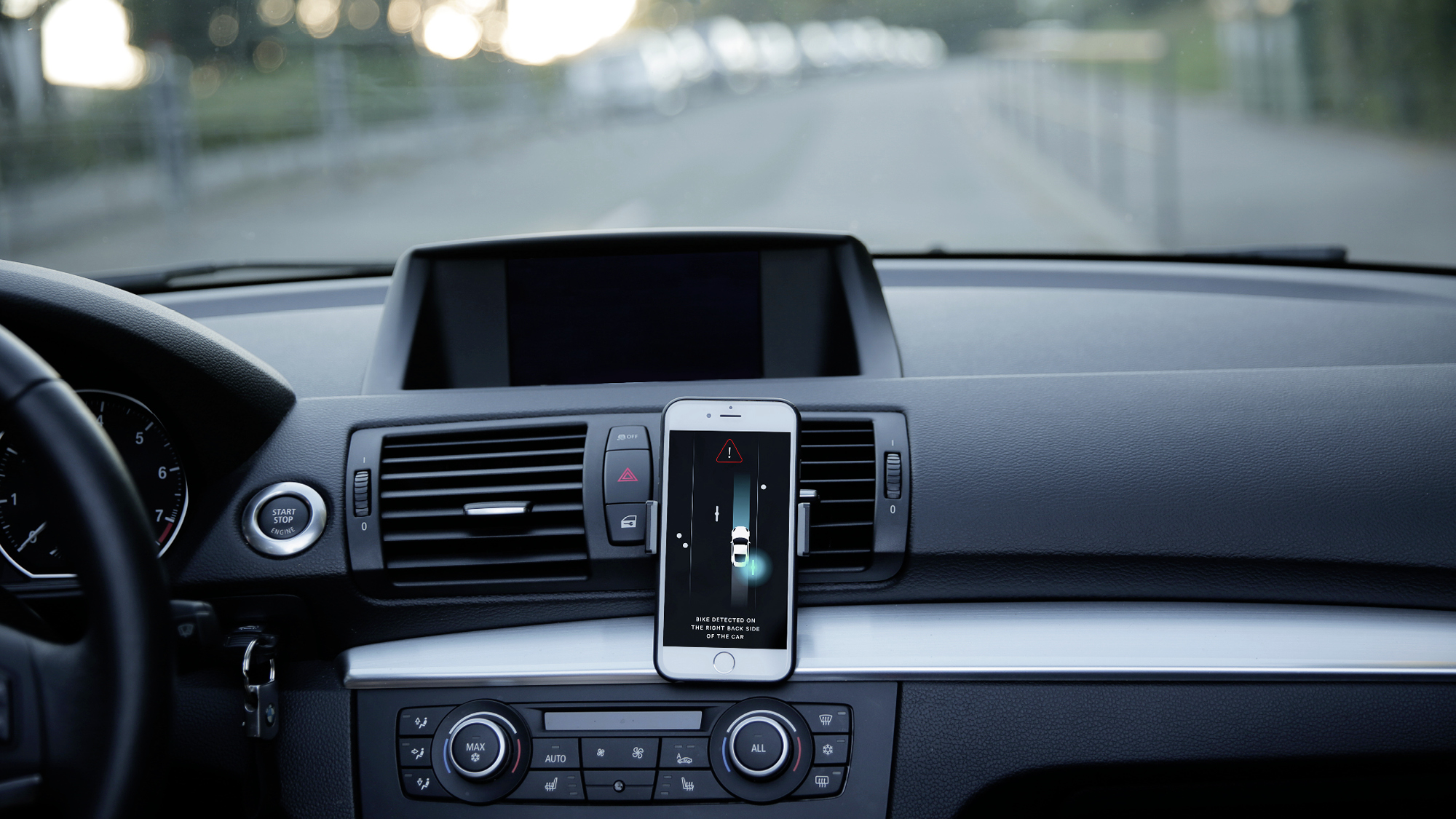 The ARCOS app in action: It can be used in combination with a normal GPS system and only gives a warning in case of a dangerous situation. 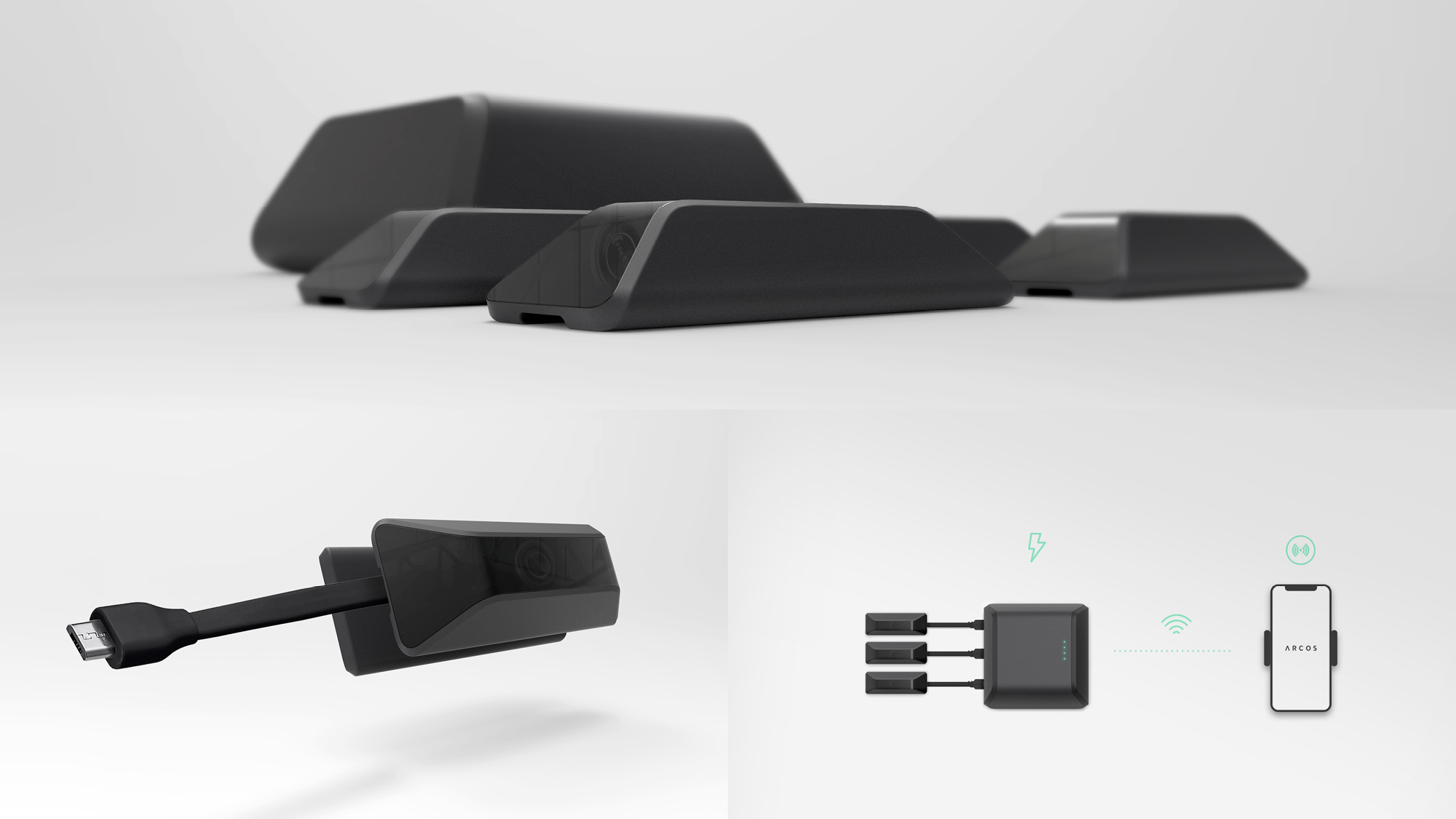 The small modules have cameras implemented and track the peripherical traffic. Constantly, information is interpreted by the Machine Learning Algorithm of our app. 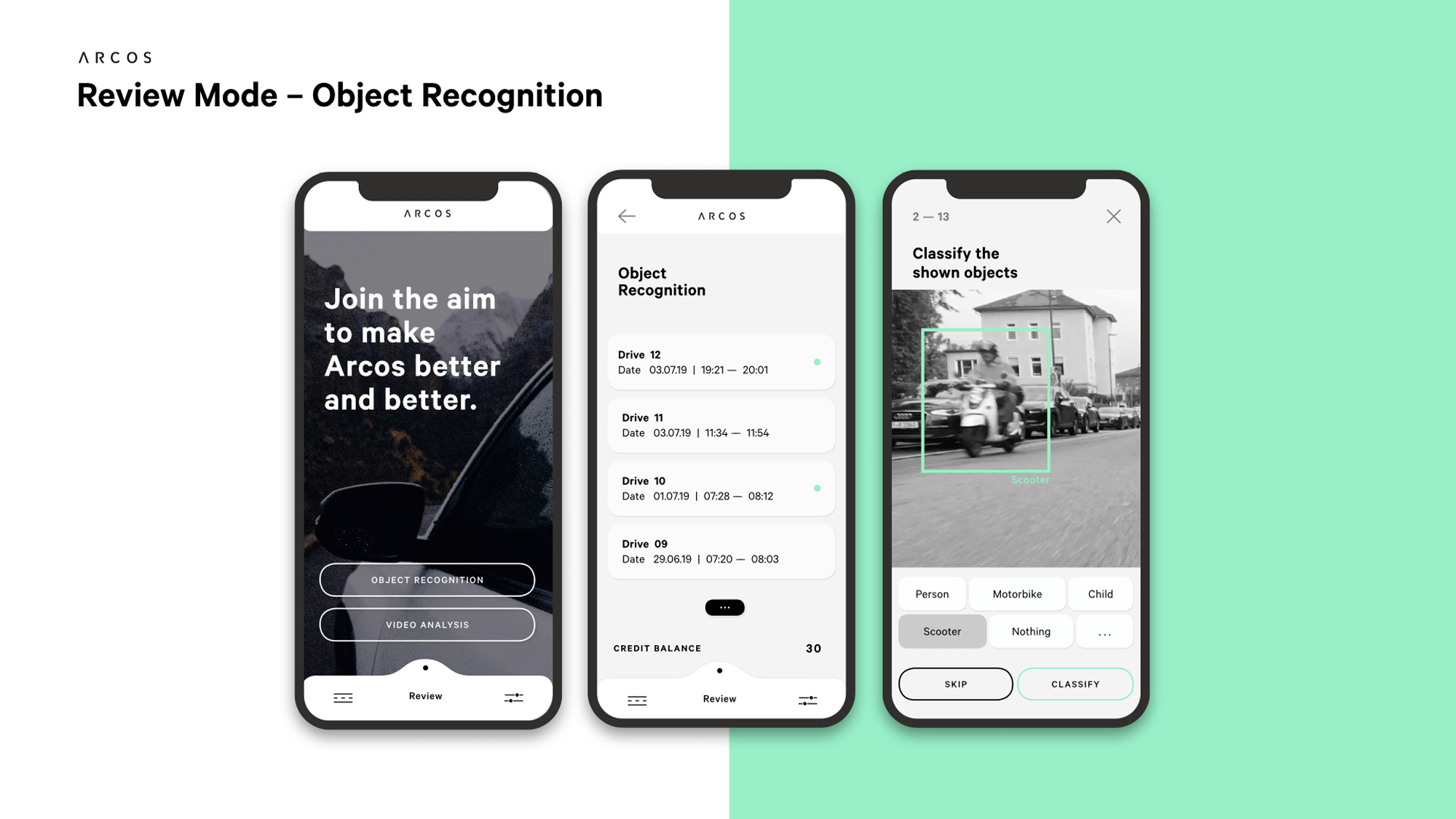 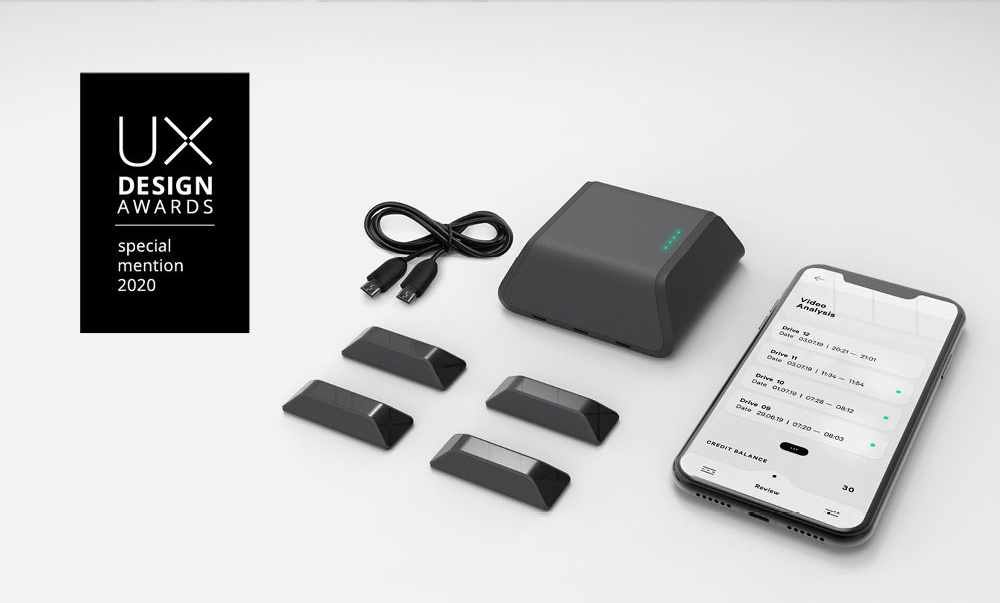